Just a little over a year after she had the nation on its feet punching the air following her dramatic triumphs at the velodrome at London 2012, Olympic golden girl Victoria Pendleton last week cut a very different figure at her wedding to the man she credits with helping make her a champion. 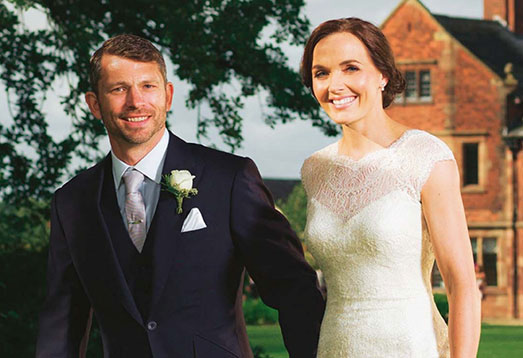 The couple have been dating since 2008, though were initially forced to keep their romance a secret for professional reasons. Five years on, however, and their fairytale ending couldn’t have been in a more romantic setting.

Bathed in the softly glowing afternoon sun, and wearing an exquisite floor-length gown with a lace bodice by British designer Suzanne Neville, the beautiful bride walked up the aisle on the arm of her twin brother Alex.

“Seeing Scott at the top of the aisle is an image I’ll keep in my mind forever,” she beams.

“I’ve had some pretty nerve-racking moments in my life and I had butterflies today, but it was fun,” she says. “I’m quite an emotional person, but I held it together pretty well.” 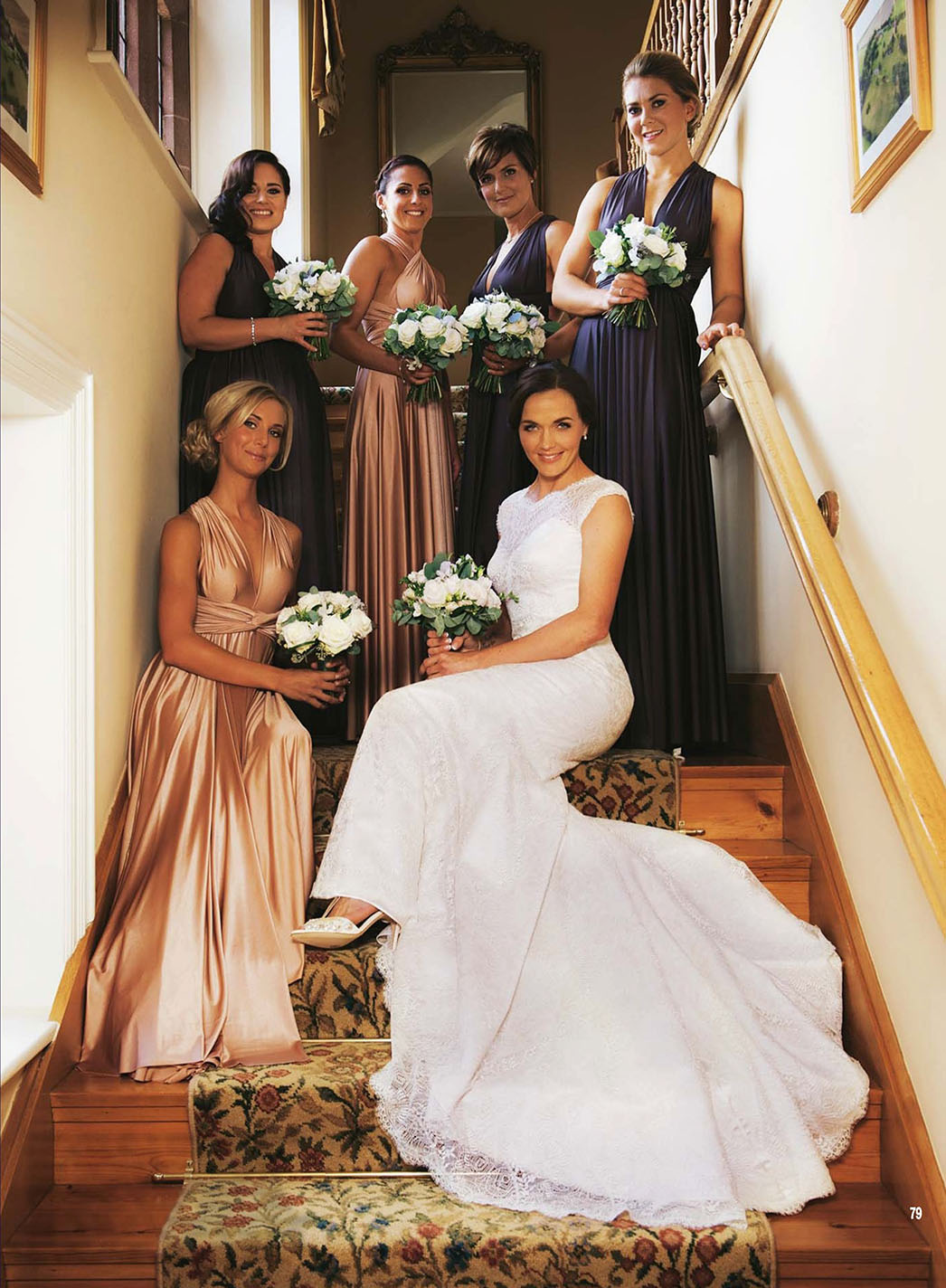 Not so adept at containing his emotions, however, was the groom, who was overcome after glimpsing his bride for the first time.

“I didn’t expect that dress,” he says. “I was just blown away by how she looked – it was the vintage look, the shape of her body, the smile on her face… That’s when I started rocking up and down on my heels, trying to hold it together.”

Then, as Victoria stood by his side, Scott recalls “squeezing her hand so tightly that halfway through the ceremony she said, ‘Please stop squeezing my hand!’ The ring had made an indentation on her finger.”

The Australian, who met Victoria when he was recruited to work for Team GB, tells hello!: “How lucky am I, eh? The day was amazing, brilliant, beautiful.”

Looking dashing in a bespoke Phillip Alexander suit, he adds: “And to have all those people there was humbling.”

Not surprisingly, among the 110 guests were many members of the Olympic squad, including swimmers Keri-Anne Payne and her husband David Carry, cyclists Jason Queally, Ross Edgar and Craig MacLean, and BMX world champion Liam Phillips. 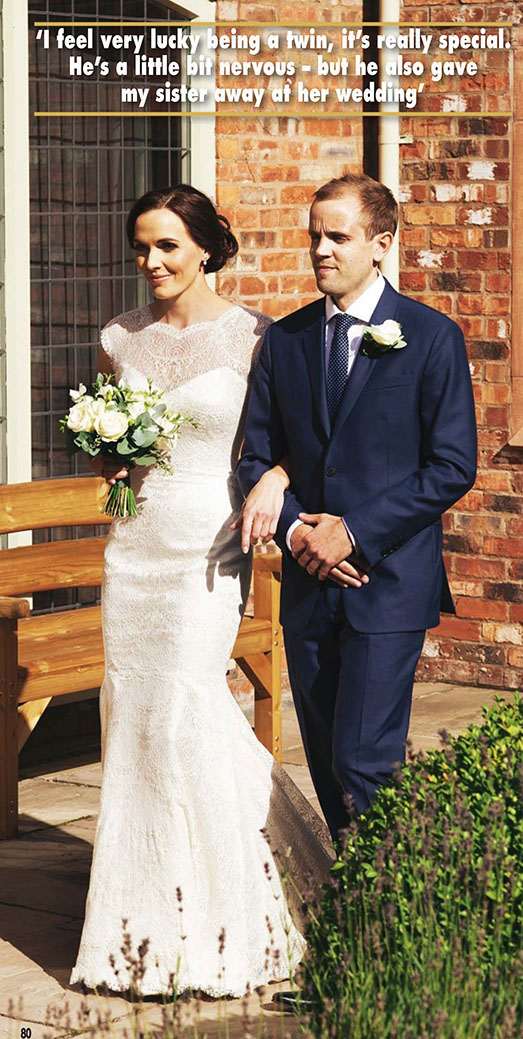 British actor Colin Salmon, who met Victoria, 32, when they were contestants on last year’s Strictly Come Dancing, was also present, along with his wife, artist Fiona Hawthorne.

“Victoria looked radiant,” says Colin, who later joined The Strictly Come Dancing Band in a performance of It’s a Wonderful World on his trumpet.”They’re a fantastic couple.”

As the new Mr and Mrs Gardner, who first bonded over their shared love of music, walked down the aisle arm in arm, the pianist, Michael G Moore, played The Smashing Pumpkins hit Today -Victoria has a line from the song: “Today is the greatest day I’ve ever known,” tattooed on her arm – and Nirvana’s Smells Like Teen Spirit.

“I’m very lucky to have met Scott. If I hadn’t done sport, our paths would never have crossed. He’s from Tasmania and I’m from Bedfordshire – opposite sides of the world.” 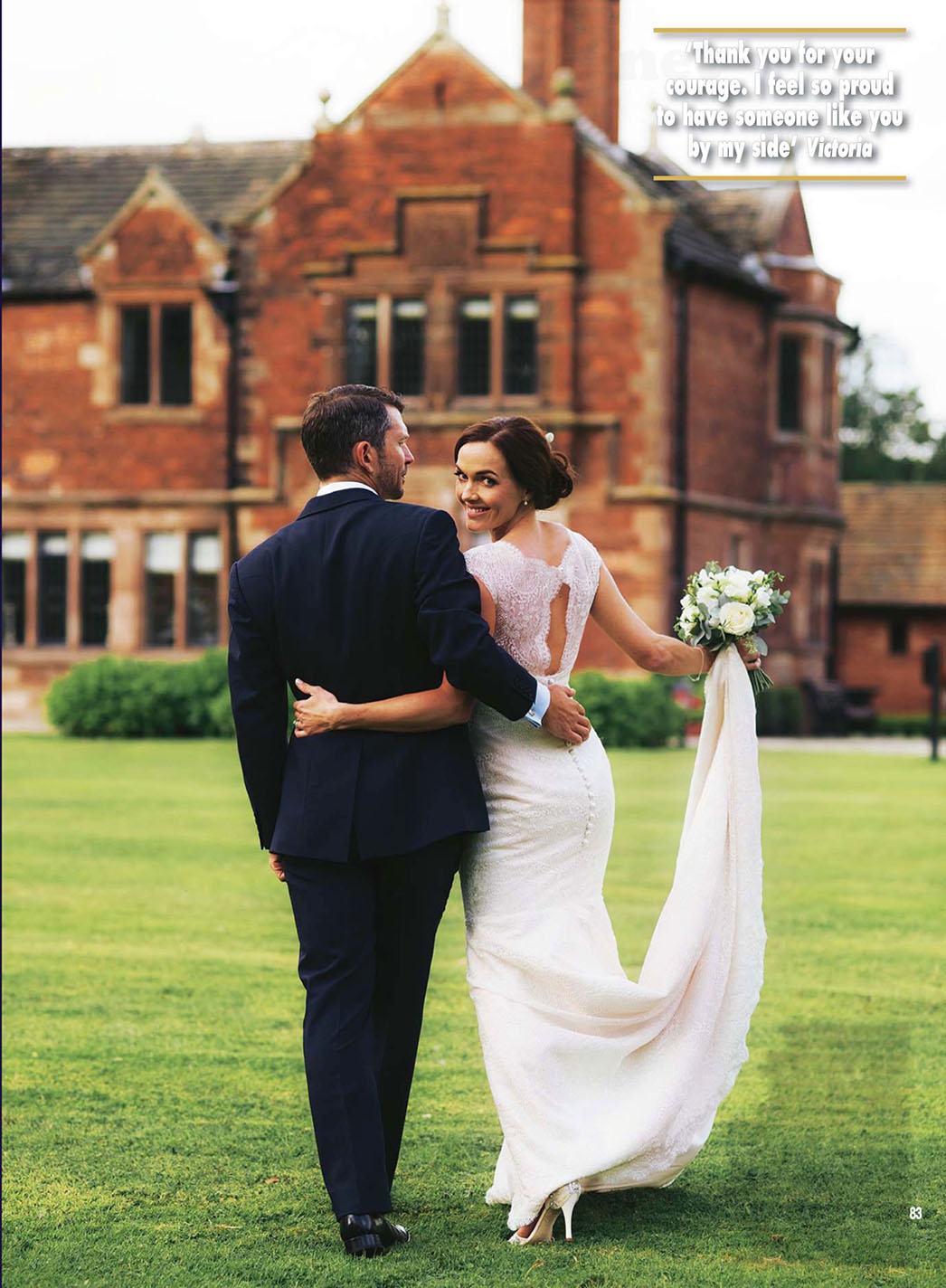 In his speech the groom updated the assembled guests on how his and Victoria’s life together has been one long whirlwind since the London Games.

“This last 12 months Victoria has won a couple of Olympic medals to add to her collection,” he said. “She’s excelled in a well-known dancing show, she’s been to Buckingham Palace and has been recognised as a Commander of the British Empire by the Queen.

“She has also published a bestselling book, been the face of Royal Ascot and afforded me my favourite day of the year – in the Royal Box at Wimbledon.

Looking at his new wife, Scott went on: “Vic, you’re my foundation stone, my inspiration, my beautiful English rose, my greatest strength, my greatest challenge.

“You’ve helped me to grow and you make me a better person. We attract as opposites and we complement with extraordinary similarities. We’re two peas in a pod and I promise to love and care for you for the rest of my life.”

In her speech, Victoria took the opportunity to thank her friends, family and “Team Pendleton”, who “supported my physical and mental endeavour to achieve my dreams. I will be forever in your debt.”

She continued: “The medals may have been put around my neck but the ribbon was only long enough for one and I was lucky to be at the front of that queue. I’ll never forget – or believe it was just me.”

To a ripple of laughter she later added: “Thank you for accepting the whirlwind of chaos and emotion that I bring.” 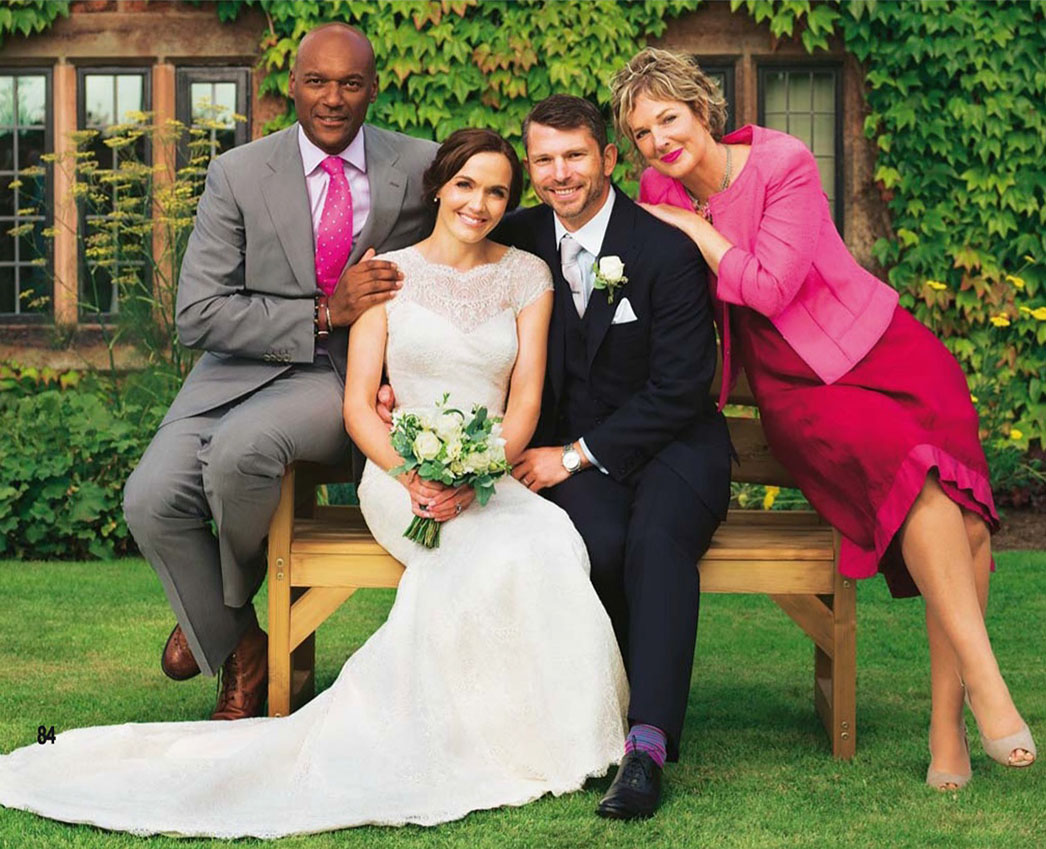 Victoria also shared with the guests how her relationship with Scott was sparked.

“It all started with three world medals and afterwards a text message along the lines of, ‘If you only knew…’ It was a bit longer than that. But there were a lot of misspelt words.”

She then revealed that she had twice attempted to propose to Scott herself. “I wanted to go against convention – equal rights and all that.” She initially planned to propose on holiday in the Swiss Alps and had composed a love letter to read out loud to Scott. She’d even packed a plastic engagement ring.

“However, I didn’t make it down the steps to the apartment before twisting my ankle and spending the weekend crawling from the bedroom to the kitchen because I’d torn a ligament. Not quite the mountain-top proposal I was hoping for.”

A second opportunity arose when the couple signed up for the Sydney Harbour Bridge climb at sunset, which “sounded romantic”. 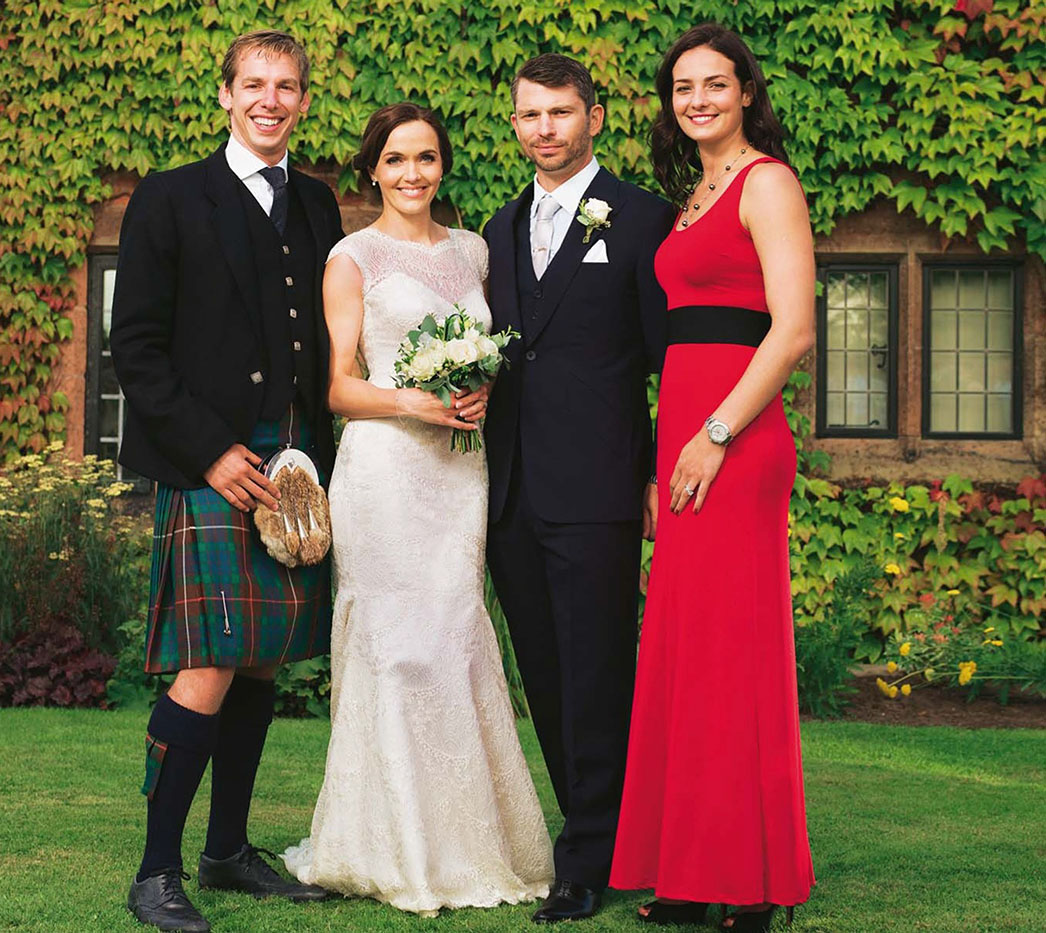 After starting the climb, however, Victoria realised that she was attached to 12 complete strangers, about one metre apart from each other: “So it wasn’t quite as romantic as I thought.”

Before she could make a third attempt, Scott beat her to it, popping the question on holiday in Tasmania in April 2009, following up with a more formal proposal on Victoria’s 29th birthday a few months later, when he presented her with a bespoke diamond ring in a suite strewn with rose petals in London’s Covent Garden Hotel.

To both the groom and the wedding guests’ surprise, Victoria produced the original love letter that she had written for Scott. Describing it as “a bit mushy”, she read out highlights.

In it she revealed how she had fallen for Scott through “a chink in the armour that you guarded yourself with… It was enough to send my heart pounding uncontrollably”.

She continued: “Now I’ve got to know you, I can honestly say that you have proved to be a treasure a million times more valuable than I thought possible.

“I must be the luckiest woman alive. Thank you for your courage in [believing in] us. I feel so proud to have someone like you by my side.”

Following the speeches, the happy couple cut the gluten-free fruit wedding cake and guests also enjoyed individual lemon cupcakes made and decorated by Victoria and her mum. 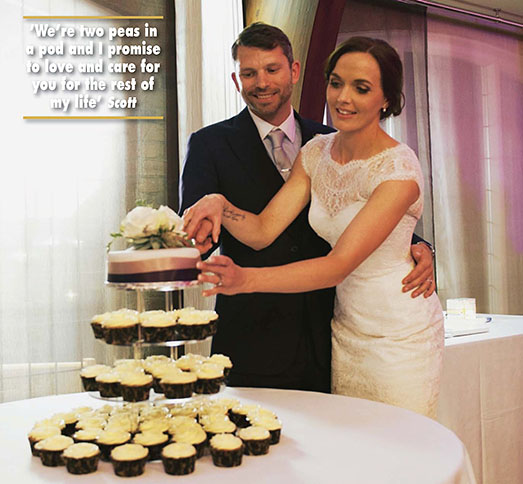 For their first dance, Victoria and Scott again chose Today by The Smashing Pumpkins, performed by Dave Arch and The Strictly Come Dancing Band. The newlyweds made a graceful pair on the dance floor, even though Victoria tells hello! She has forgotten much of what she learnt on ‘Strictly Come Dancing’ last year.

“I just wish that I could do Strictly again,” says Victoria, explaining that she signed up for the popular show immediately after London 2012 and so didn’t have much time to think about it or prepare herself. “It was all too much to take in,” she adds.

The celebrations continued until midnight and two days later the couple headed off on a “mini-moon” – a brief holiday in Cornwall, arranged by Scott. They now have their upcoming house move to finalise – they are relocating to Oxfordshire to be closer to Bisham Abbey National Sports Centre, where Scott is now based for his latest role, as head coach for Team GB’s canoe sprint programme – and Victoria is contemplating her future.

Now that they are looking forward to planning their future together, would they like to start a family?

“We’re not ready yet, but maybe, maybe – you never know,” says Victoria. For now, though, they are basking in their newlywed glow. Scott, who has further cause for celebration this week when he turns 38, sums it up neatly: “Today is the greatest day I’ve ever known.” 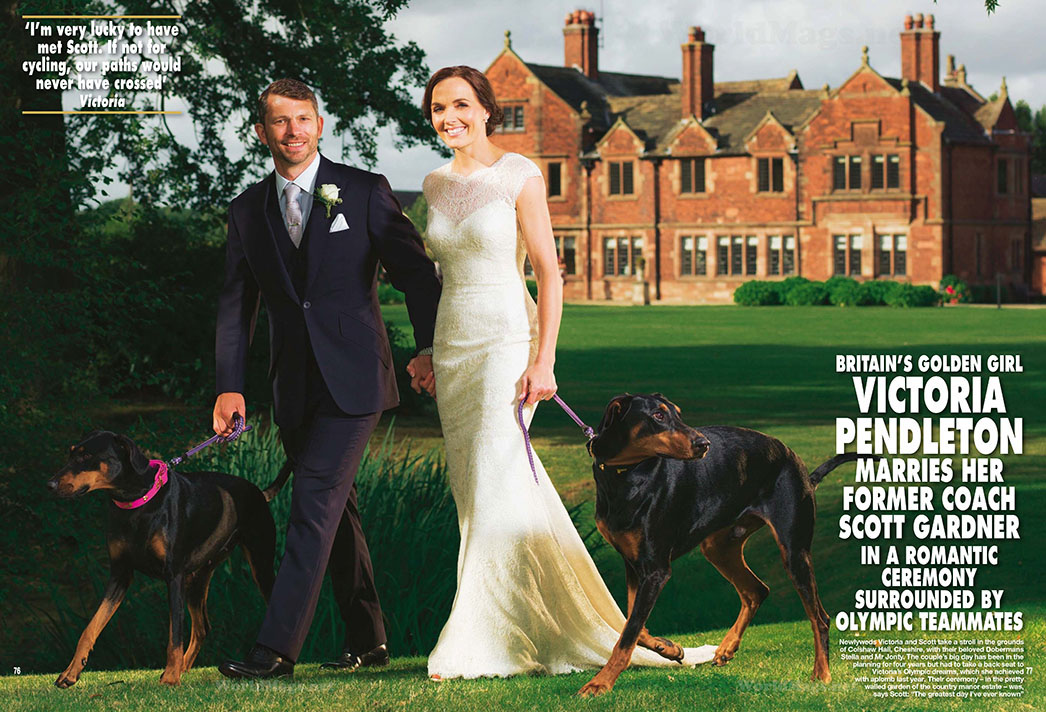