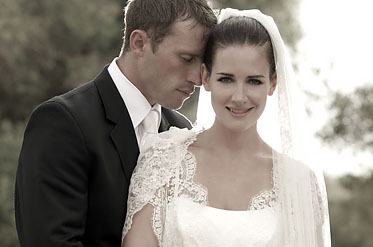 They say the moments you truly treasure in life are worth waiting for and TV presenter Kirsty Gallacher would have to agree. It may have taken Kirsty Gallacher and rugby union player Paul Sampson nine years to tie the knot, but when they did — on Saturday 24July, in the beautiful historic town of Arcos De La Frontera in southern Spain — it was more magical than either could have imagined.

Their aim, bride Kirsty Gallacher exclusively tells HELLO!, had been to recreate the relaxed ambience of past family holidays. And even with 100 family members and friends joining the celebrations, they achieved that perfectly. 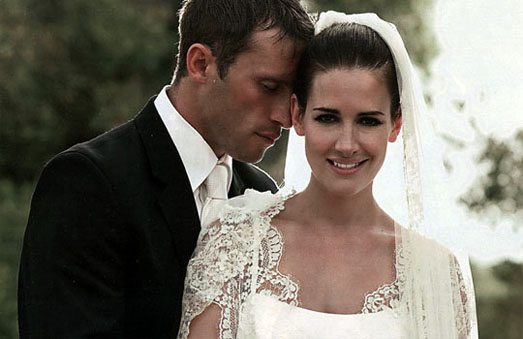 Kirsty Gallacher and Paul Sampson have been together nine years and have two children, but still felt their big day was special.”I feel like the bond I have with Kirsty is stronger now,” reveals England ex-international rugby player Paul

“My parents have a house in Arcos and it is such a pretty place,” says Kirsty Gallacher, 34, eldest daughter of former Ryder Cup-winning golf captain Bernard Gallacher and his wife Lesley. “It is set in the hills and is so rich in history — the writer Ernest Hemingway used to go there for inspiration. Because Paul and I have been together for so long, and as we have our two boys [Oscar, three and Jude, aged six months], we didn’t feel that a traditional wedding at home was right for us.

“We were able to pick and choose which parts of the day followed Spanish tradition and which parts were more British, which worked brilliantly”

Kirsty’s sister Laura, 23, was a bridesmaid and so was Paul’s sister Kerry. For their outfits, Kirsty Gallacher picked pretty dresses made of blush-coloured silk. “I chose an Alexander McQueen design, which a wonderful designer called Lynda Yong, who is based quite close to our home in Surrey, then tweaked,” Kirsty Gallacher reveals.

She had toyed with the idea of Oscar being a pageboy, but in the end decided he was too young. “I bought the boys’ clothes from Princess Marie Chantal of Greece’s collection. Oscar wore his with Converse All Star trainers. He and Jude looked so cute.”

As for Kirsty’s divine Suzanne Neville bridal gown, it could not have complemented the magnificent setting of their wedding more perfectly. An elegant ivory silk dress overlaid with intricate French lace, the look was completed with an exquisite full-length veil. “I’d had a definite picture in my mind of what I wanted and I felt so honoured to have Suzanne make it for me,” Kirsty Gallacher tells HELLO!.

“I first visited Suzanne last November, when I was pregnant with Jude, but because I didn’t put on a lot of weight she could see what my figure was like. When I went back in March, she’d put aside a few designs that she thought would be perfect for me and the first dress she’d put aside was the one I ended up wearing.”

The ceremony took place at Arcos De La Frontera’s magnificent San Pedro Cathedral, perched on a cliff top and looking out over the Andalusian countryside.

“As I rounded the corner, I could hear the flamenco choir and it was so overwhelming,” says Kirsty Gallacher, who carried a bouquet of antique roses, which her mum Lesley had chosen. Clutching the arm of her proud dad Bernard, who’d been totally bowled over by the sight of his girl in her bridal gown, Kirsty Gallacher made her entrance.

“I’m not one to hang around and nor is my dad, and both of us were so nervous we just wanted to get to the front,” Kirsty Gallacher tells us. “I knew Paul would be nervous at that point too. When we reached the altar, I could see he had tears in his eyes, which was very moving.”

“I shed a small tear,” says Paul, who looked so dashing in his navy blue William Hunt suit. “Not only because Kirsty looked absolutely incredible, but for lots of reasons. It was a very emotional few days.”

Sadly, Paul’s father Brian died five years ago, and there was sadness, too, that Kirsty’s maternal grandmother, Peggie, could not be with them, as she died two years ago.

“But my mum sewed my grandmother’s wedding ring into the back of my dress and Paul wore his father’s ring, so although they couldn’t be there, they were with us,” says Kirsty Gallacher.

A WING AND A PRAYER 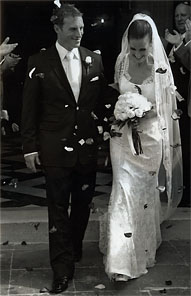 The service was conducted in Spanish, with a friend translating. “I wasn’t nervous saying our vows, as the ceremony was meant to be relaxed,” England ex-international winger Paul, whose half-brother Christopher was best man, tells HELLO!. “I was more so about my speech, as I had so many people to thank and didn’t want to forget anyone.”

The couple left the church for the reception at Arcos Gardens Golf & Country Club in a classic Jaguar, which had trouble negotiating the narrow cobbled streets, causing some hilarity among onlookers. With a bit of manoeuvring the driver finally managed it and everyone cheered,” laughs Kirsty Gallacher.

At the Arcos Gardens, guests enjoyed a champagne reception and were entertained by a traditional Spanish guitarist, who also played in the olive garden, where the main reception took place. Big vases containing church candles flickered in the evening light. “The place was dotted with lots of little tea lights. It looked stunning,” says Kirsty Gallacher.

Speeches were made before the main meal, with England rugby international prop David Flatman taking on the role of master of ceremonies with singular charm.

Despite his nerves, groom Paul’s speech struck the perfect balance between humorous and heartfelt “He did come out with some very funny lines before he got to, ‘And I’m so glad you’re my wife,’” reveals Kirsty Gallacher.

Her father’s speech proved especially moving. “He said how very much he and Mum love Paul, which was really sweet,” Kirsty tells us. “Dad’s not the kind of man to get choked, but I could see he was emotional.”

Then it was time to eat. Embracing the Mediterranean flavour of the occasion, guests enjoyed a traditional tomato-based dish called salmorejo followed by fillet of beef and a lemon tart.

“It was perfect, sitting out among the olive trees, chatting, laughing, eating and drinking,” says Kirsty Gallacher. 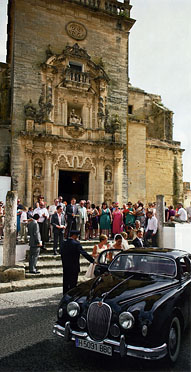 But, unbeknown to her, Paul had arranged a special surprise. Last year, the couple attended the wedding of friends where they had been entertained by an acoustic band called The Gypsy Queens.

“They were fabulous and Paul had booked them secretly as a wedding gift to me. People were dancing on the tables.”

It was then the bride and groom’s turn to take to the dance floor. “We danced to Stevie Wonder’s You Are the Sunshine of My Life, then it switched to David Bowie’s Let’s Dance and everyone got up,” reveals Kirsty. “It was past midnight by this time, but my mum and Paul’s mum were still going strong at 4am and Paul and I called it a night at about 5.3Oam.”

The newlyweds stayed in Spain for a week’s honeymoon, but are now home and it’s straight back to work for Kirsty Gallacher, who takes over Lorraine Kelly’s slot on GMTV for two weeks, starting on 16 August.

“We wanted our wedding to be a real family occasion, with close friends and lots of children, and we had that. But it was more incredible than we could ever have wished for,” Kirsty Gallacher tells HELLO!

Paul adds: “The moment I will treasure most is walking out of the cathedral, arm in arm with my wife, to be greeted by our two sons and all our friends and family in the most beautiful and intimate of settings.

“Someone said to me that it feels no different after marriage, but I’m sure they were joking. I feel the bond Kirsty and I have is definitely stronger now, which feels amazing after nine years. Slightly unexpected, but a wonderful feeling.”

The most heavenly new arrival has just landed in store from @suzanneneville - the dreamy Hailey. We love with the chic square neckline, delicate strap detail and that fabulous silk organza split skirt - not to mention the dainty buckle belt, she's sure to be firm favourite!

And just like that, Show One is done! Which Celebs got your vote?

S A M P L E S A L E 🤍
We have some exciting news!! We are going to be having a #samplesale at our London flagship showroom!!
✨Monday 31st January - Thursday 3rd February✨
To book an appointment please call our London showroom on: 0207 823 9107.