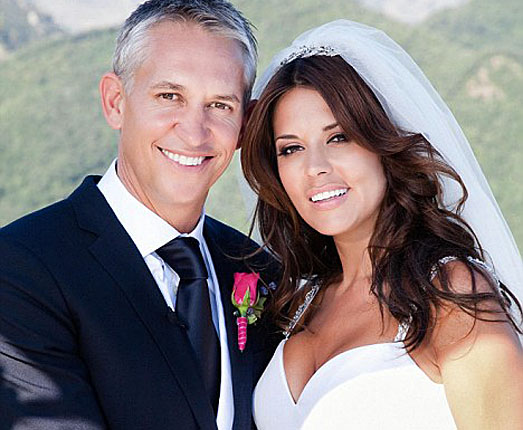 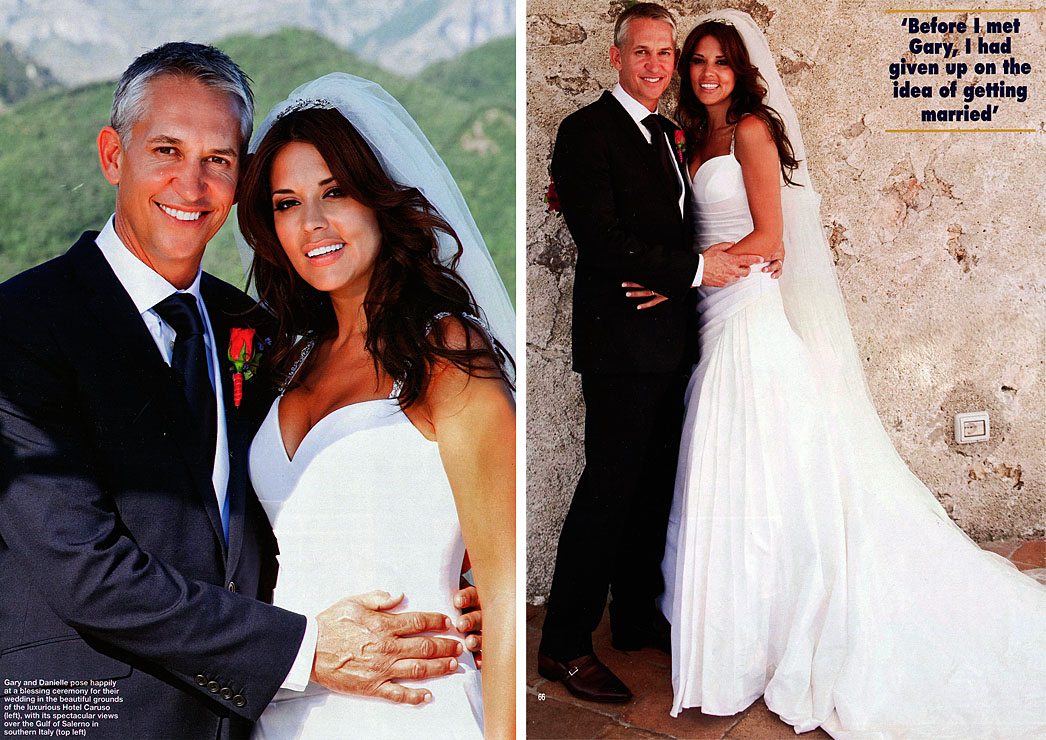 Gary and Danielle pose happily at a blessing ceremony for their wedding in the beautiful grounds of the luxurious Hotel Caruso, with its spectacular views over the Gulf of Salerno in southern Italy

Almost a year to the day after proposing during a romantic getaway to Italy’s stunning Amalfi Coast, football star-turned-TV-presenter Gary, 48, whisked the model back the same idyllic location to marry her.

Fittingly perhaps for a footballing legend, the nuptials were a game two halves, with the simple ceremony, costing just £400 and at the town hall in the picturesque resort of Ravello, followed a day by a moving cliff-top blessing lavish reception party for around guests, believed to have set the multimillionaire sportsman back £250,000.

For the town-hall proceedings legal requirement in Italy — Gary, hosts BBC1’s flagship sports show Match of the Day and who refused offers to sell exclusive rights to big day to newspapers and magazines, opted for casual chic and a black open-necked shirt and black trousers.

“It was a very normal wedding — there was nothing extravagant,” councillor Luigi Apicella, who performed the ten-minute ceremony, said later. “He [the groom] didn’t even have a jacket or tie on and they walked to the town hall.

“The bride wore a cream dress and the service was in Italian, with a local girl translating for them.”

Another official shot of the new Mr and Mrs Lineker to mark the occasion. Danielle looks classically beautiful in a £9,000 satin custom- made gown by Suzanne Neville. After their civil wedding ceremony in Ravello, the newlyweds board a boat for a celebratory trip.

Close friends and family then joined the couple on a celebratory boat trip, toasting their future happiness with Champagne. 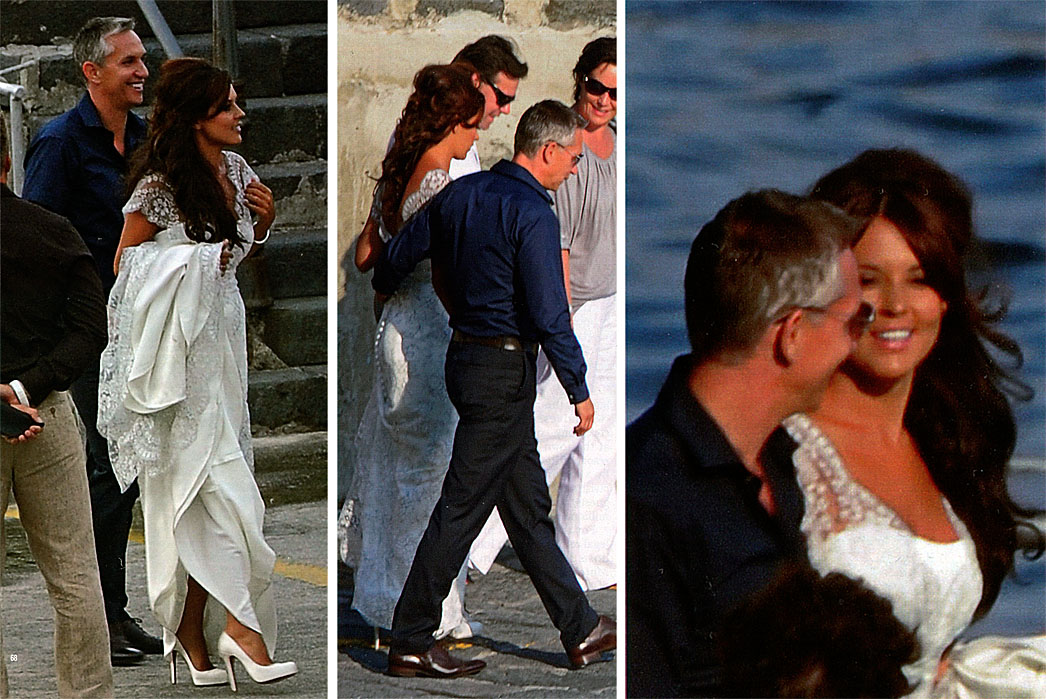 Nearest and dearest join the happy pair on the boat trip. Danielle looks elegant in a long ivory dress with silver-grey lace and six-inch stilettos, while Gary — hand in hand with one of his sons — dresses informally without jacket or tie. The ten-minute ceremony was in Italian with two witnesses. “There was nothing extravagant,” said councillor Luigi Apicella

It was back in October that she first exclusively revealed to HELLO! her and Gary’s plans to marry outside the UK.

“We want to get married abroad and somewhere hot, but not at Gary’s house in Barbados,” an excited Danielle, whom Gary had presented with a stunning cushion-cut solitaire diamond and platinum engagement ring, told us.

“We want something small and intimate, especially if we are travelling abroad. I wouldn’t want a massive wedding where I barely know some people and don’t get to spend decent time with friends and family.” 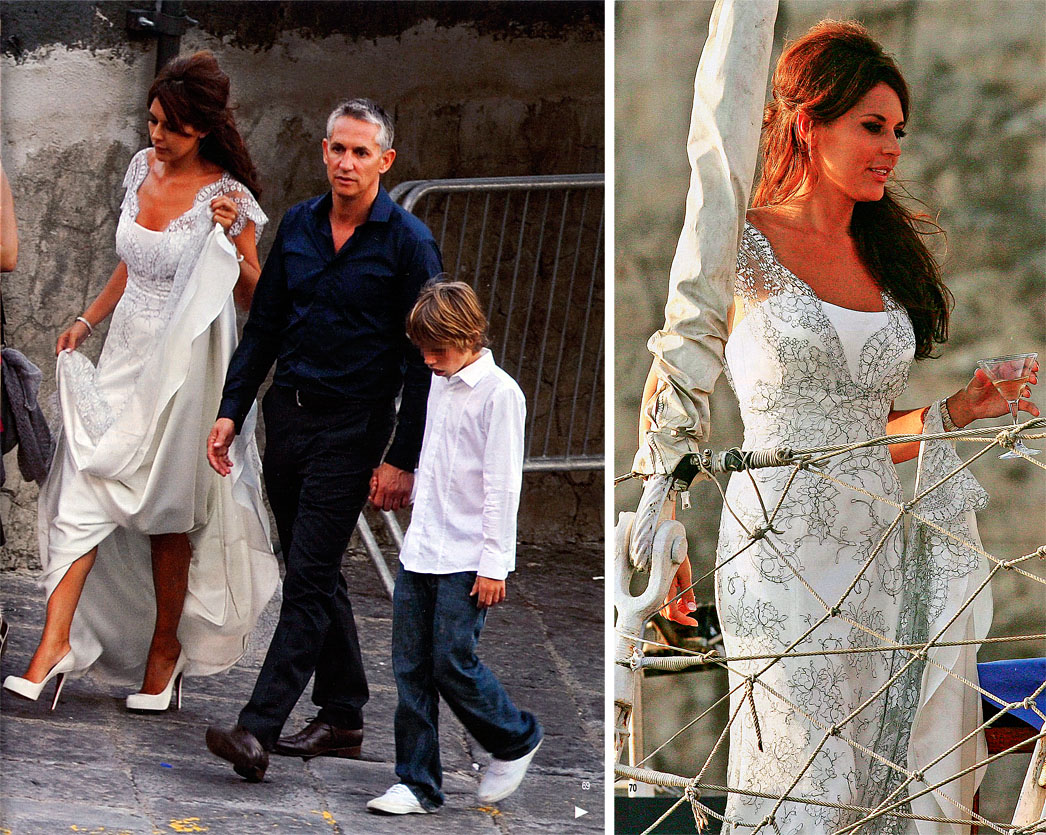 Danielle and Gary are on the crest of a wave as they toast their future happiness with friends and family. “As a girl you imagine your wedding day but as you get older you get real,” she told HELLO! before her big day — but now her dream has come true

But with the wedding celebrations stretching over two days, she and her sporting hero husband had plenty of opportunity to ensure none of their guests felt neglected.

Eighty friends and loved ones — including George, 17, Harry, 16, Tobias, 13 and Angus, 12, Gary’s four sons from his 20-year marriage to first wife Michelle — were present at their touching blessing ceremony, in the grounds of the sumptuous Hotel Caruso, where executive suites cost £3,000 per night.

To protect their privacy the newlyweds had hired out the entire hotel through top celebrity wedding planners Love & Lord, who offer this option as part of their Ultimate Take-Over package.

The company, whose clients have included Russian oligarchs, wealthy retail entrepreneurs and high-end restaurateurs, had been in secret talks with the couple for six months. 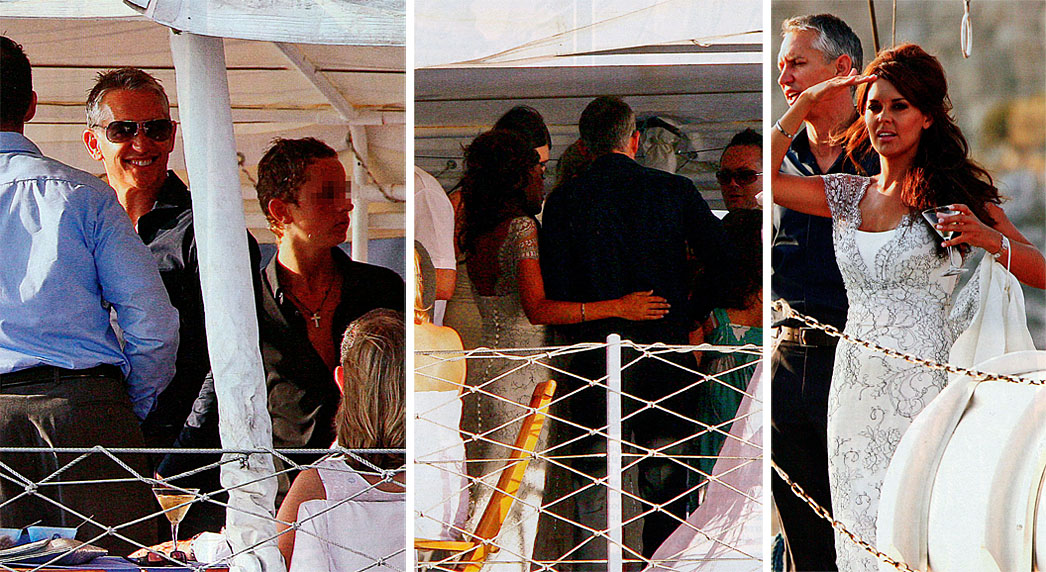 “They were an absolute pleasure to deal with,” owner James Lord told HELLO! “They were not at all difficult or demanding and were happy to take guidance and we understand that they are thrilled with the results.” Danielle — looking classically beautiful in a £9,000 satin custom- made gown by award-winning designer Suzanne Neville, teamed with a simple white veil — walked down a petal-strewn aisle in the hotel’s lush gardens to the haunting strains of Ave Maria.

Her groom, who works out daily to maintain the same trim physique he boasted during the height of his footballing career — which saw him score 48 goals in 80 games for England, making him the national side’s second highest scorer — looked handsome and dapper in a smart black suit and cream waistcoat, with a single red rose in his lapel.

Ella, Danielle’s cute seven-year-old daughter from her relationship with retired footballer Adam Willis, was flower girl. She is said to have built up a close relationship with her famous stepdad. “Ella took to Gary immediately because he is so fantastic with children,” Danielle exclusively told HELLO! last year.

All hands on deck! The following day, the couple had a touching blessing ceremony in the grounds of the hotel where Gary had proposed a year earlier, followed by dinner in the open-air restaurant. “The setting was unbelievable,” said an onlooker. “They had a violinist and an opera singer performing — it was absolutely perfect” 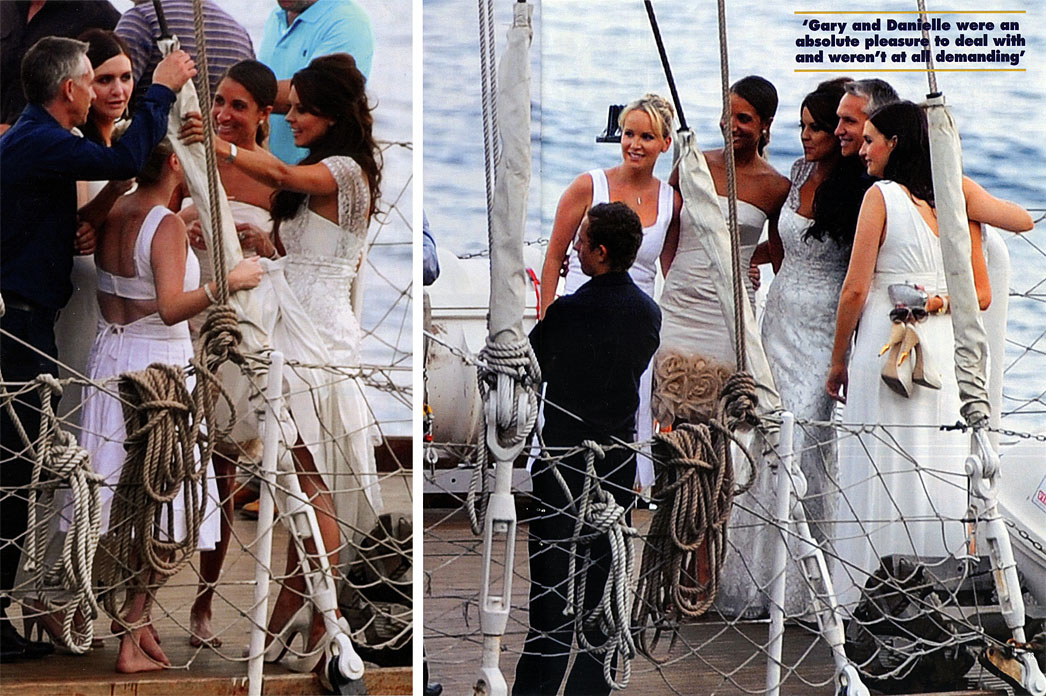 Poignantly, the bride was given away by her adored half-brother, Kaid Mohammed, who was left paralysed after severing his spinal cord in an accident two years ago.

Back in October, Danielle spoke candidly about her strong bond with the 24-year-old and her shock and devastation at seeing him clinging to life in intensive care.

“He is very lucky to be alive,” the former air stewardess told us. “So far he has been able to use his arms to push a wheelchair. He’s so brave, he’s my hero.”

After the blessing, guests including Gary’s Match of the Day colleagues, pundits Alan Hanson and Alan Shearer, were treated to a delicious six-course dinner in the hotel’s open- air restaurant, which was adorned with pink roses. 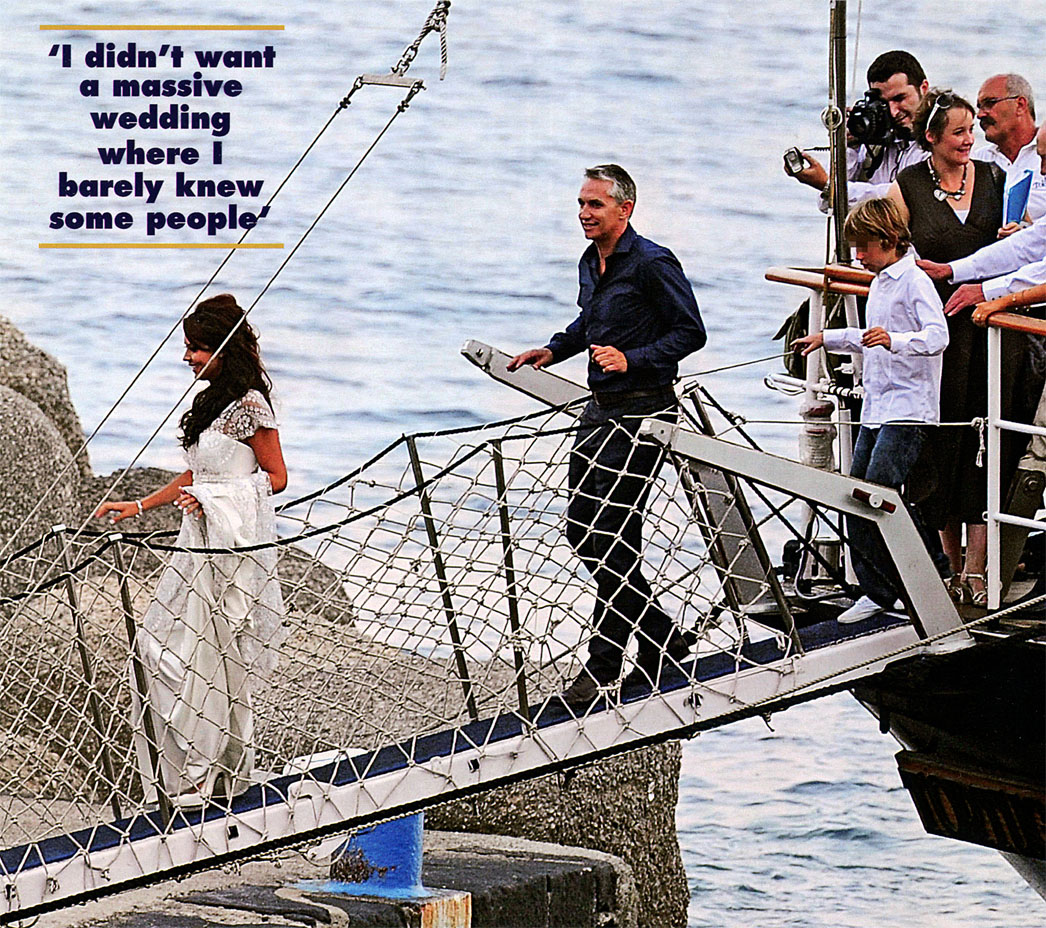 “The setting was unbelievable,” said an onlooker. “They had a violinist and an opera singer performing — it was absolutely perfect”

Contrary to reports, Welsh pop star Duffy did not perform at the celebrations, but avid football fan DJ Spoony did, manning the decks at a party that had everyone up dancing.

Danielle, who shares a £2million, six-bedroom home near Esher, Surrey, with her new husband, was also spotted the day after the wedding extravaganza, looking relaxed and radiant as she warmly kissed guests and family goodbye outside the hotel. The couple are now on honeymoon, enjoying some quality time together as man and wife.

“Before I met Gary, I’d given up on the idea of getting married,” Danielle confided to HELLO! last year. “As a young girl, you do imagine your wedding day, but as you get older you get real.”

But for Danielle that little-girl dream became a reality and she found her perfect match.

“I’m going to be the happiest woman in the world,” she said recently, as the big day approached. “I love everything about Gary and I can’t wait to be his wife.”

Now, she doesn’t have to and we wish them every happiness. 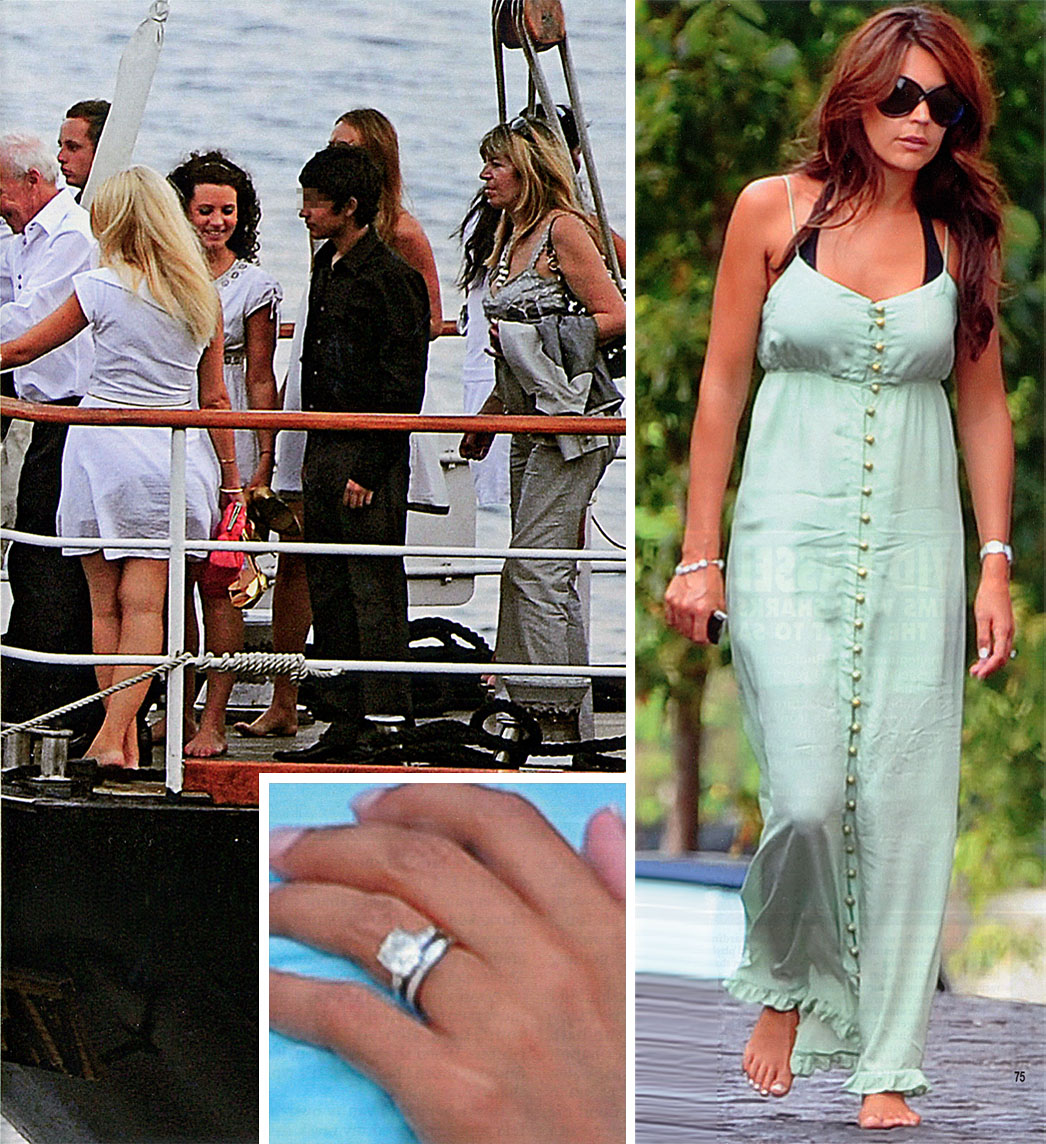 The celebrations over, Danielle, wearing her cushion-cut solitaire diamond and platinum engagement ring and wedding band (below), takes a stroll (right) before she and Gary embark on their honeymoon. “I’m going to be the happiest woman in the world,” she’d said as her big day approached