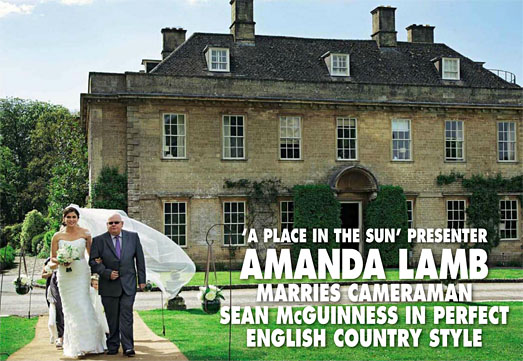 The beautiful bride, wearing a Suzanne Neville dress, walks from Babington House in Somerset to the chapel on her dad Michael’s arm and poses with her bridesmaids, sister Jo, Debbie Wagstaff and Ruby Gardner

Radiant in a strapless lace dress, beautiful bride Amanda Lamb descended the staircase of Babington House ahead of her wedding to Sean McGuinness just as their three- year-old daughter and flower girl Willow piped up: “I love you, Mummy,” thereby setting the tone for a heartfelt and memorable day.

“It was magical,” says Amanda, presenter of You Deserve This House. “When I walked up the aisle, I remember thinking, ‘This is happening, the thing that I’ve dreamt about… ‘ I just wanted to savour every single second.”

The couple tied the knot in the chapel of the luxury hotel in Somerset, which dates back to 1750, surrounded by 75 family and friends including Eamonn Holmes and Ruth Langsford, Bernie Nolan, Dragons’ Den’s Deborah Meaden, Paul Ross, chef Matt Tebbutt and Christopher Biggins. 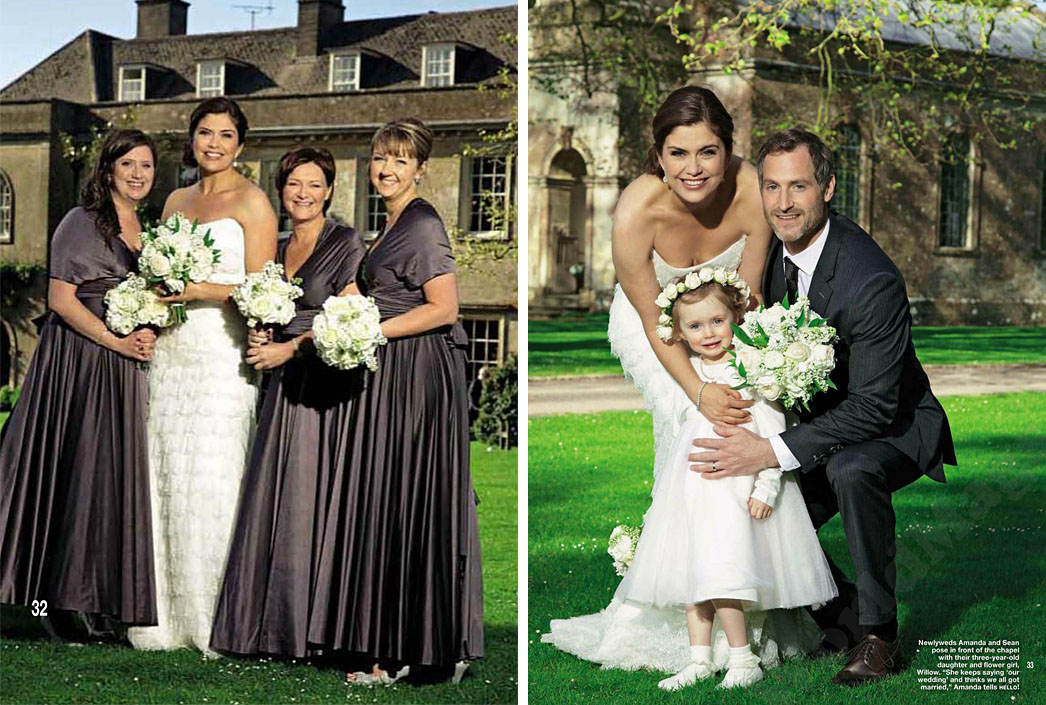 Newlyweds Amanda and Sean pose in front of the Chapel with their three-year-old daughter and flower girl, Willow. “She keeps saying ‘our wedding’ and thinks we all got married,” Amanda tells HELLO!

In typically British style, it was pouring with rain on the morning of the wedding but the skies cleared an hour before the ceremony.

“The doors opened and there she was, all backlit and looking absolutely stunning,” says cameraman Sean, who met Amanda when they worked together on A Place in the Sun. “I was overwhelmed with emotion. Fortunately, everybody was looking towards the door, because I had to take a little moment to compose myself.”

Former model Amanda, who was wearing a Suzanne Neville gown that featured a diamanté belt, gave a big grin that would last all day.

“Because the chapel is so intimate, I could see every single person I loved,” says Amanda, who walked down the aisle on the arm of her father Michael. “It was beautiful.”

“I have never been as nervous as I was in the morning,” says the popular presenter, who became a familiar face when she fronted a 1994 ad for Scottish Widows.

“Bearing in mind that I’ve been in TV for years, have spoken at conferences and all sorts. Then, when I saw Sean, I wasjust so glad to see him.” 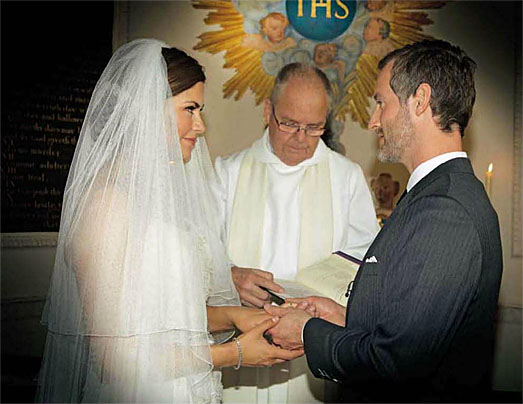 ‘Sean has given me a life I never thought I’d have. He’s an incredible man’

The couple exchanged rings that they had chosen with the help of Amanda’s long-term friend Harry Collins, official jeweller to the Queen. They then signed the register while Sean’s friend Claire O’Brien sang Roberta Flack’s The First Time Ever I Saw Your Fact.

Eamonn Holmes and Ruth Langsford had chosen the same song for their wedding.

Recalls Sky News host Eamonn: “It brought back memories of our day. Amanda looked so beautiful and so happy.”

Adds Ruth: “I had a tear in my eye. Amanda and Sean look so in love.”

Christopher Biggins brought a light-hearted tone to the ceremony when he stood up to read the Pam Ayres poem Yes, I’ll Marry You, My Dear in a West Country accent.

“They are an adorable couple,” he tells HELLO!. “They are such nice people, there’s no side to them. What you see is what you get.” 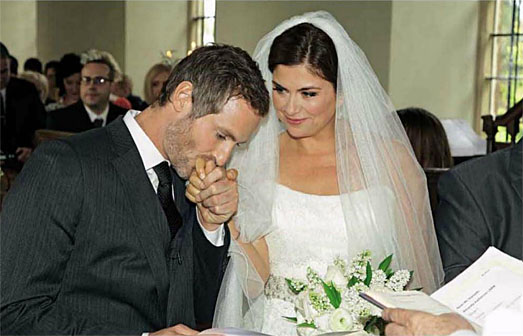 Tender moments during the intimate ceremony, conducted by the Rev. Colin Turner. The rings are by the Queen’s jeweller Harry Collins, who loaned Amanda other gems for her big day

When the bride and groom walked up the aisle, to the sound of cheers and applause, Amanda’s eyes glistened with tears.

“We emerged into glorious sunshine and it was like we’d walked out into a different day because the weather had been so hideous that morning,” she said. 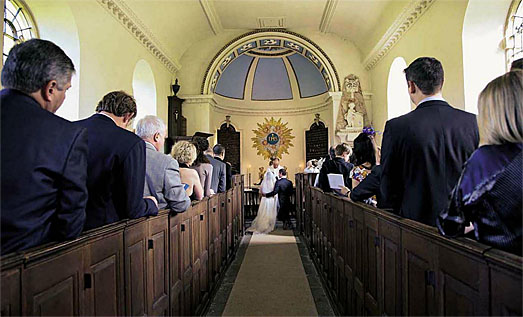 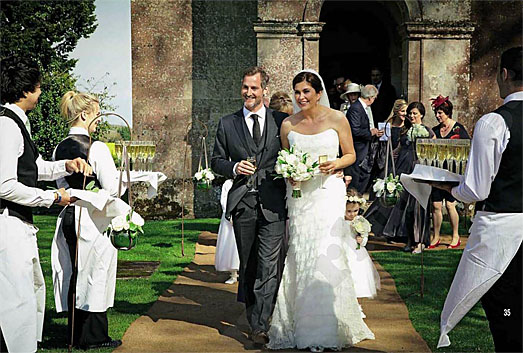 The ceremony was held in front of 75 friends and family members, including Amanda’s mother Christine. “Because the ‘Chapel is so intimate, I could see every person I loved,” says Amanda. “When I walked up the aisle I thought, ‘This is happening, the thing I’ve dreamt about.” “The doors opened and there she was, all backlit and looking stunning,” says Sean. “I was overwhelmed with emotion”

Guests got to enjoy that sunshine at a champagne reception in the hotel’s picturesque grounds before heading to the orangery for a three-course meal. The speeches followed, and during his Sean spoke about meeting Amanda.

“I was brought into A Place in the Sun with quite specific instructions,” he said. “My job was to bring the team together, charm Amanda and keep her happy.
“I think I took my job a little too seriously,” he joked.

Many of their A Place in the Sun colleagues were at the ceremony, including his best man Scott Price, who was the property show’s editor.

“Life before Mandy seems irrelevant now, says Sean. She has made me the person I’m meant to be.” Turning to the new Mrs McGuinness, he adds: “My world is a brighter place with you and Willow in it.”

Amanda hadn’t planned to make a speech but couldn’t resist standing up. “As most of you know, I am not somebody to be quiet in the corner,” she said to much laughter.
“About eight years ago, I came to Babington House with some girlfriends and a wedding was taking place here,” she told the guests.

“I was in my Bridget Jones phase at that moment and I remember thinking, ‘That’s what I want my life to be like and it will never be like that.’

“Sean has given me a life I never thought I’d have. He’s the most incredible man I’ve ever met. To quote Toy Story, ‘I love you to infinity… and beyond.” 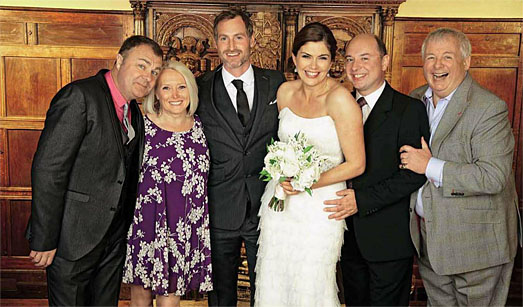 Joining Amanda and Sean, who first met while working on property TV show A Place in the Sun, in their celebrations are TV host Paul Ross and wife Jackie, and Neil Sinclair and partner Christopher Biggins, as well as Bernie Nolan and Ruth Langsford

“A cameraman had left, so we were waiting to meet the new one. We were in Rheims, in the French Champagne region, and Antonio the sound man and I were waiting downstairs in the hotel for everyone.

“Sean came down the stairs and I said to Antonio, ‘It can’t be him, he’s gorgeous.’

“There was no romance at the time because we were both with other people. I was just like, ‘Thank God he’s normal,’ because we all have to work so closely.

“We knew each other for a good year and a half before we got together. Sean saw the good bits, the drunk bits, the grumpy bits — when I was losing the plot when the luggage hadn’t turned up at 5am.

“Then, when we did get together, we didn’t have to go through all that getting-to-know-you stage.”

Their A Place in the Sun co-stars all said they had spotted the chemistry. and Sean and Amanda officially became a couple in January 2008. Within five months they were expecting Willow. Sean decided to leave his home town of Manchester for a new life with Amanda in Surrey.

“A Place in the Sun changed my life full stop,” says the presenter, who joined the series when it launched in 2001. 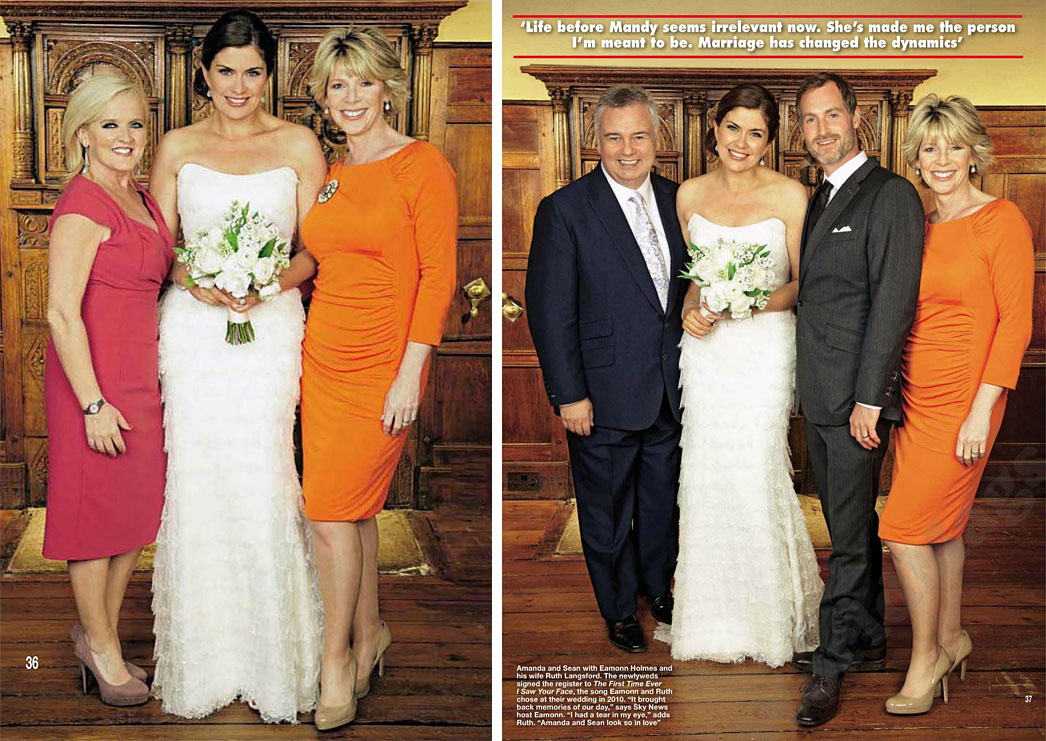 Amanda and Sean with Eamonn Holmes and his wife Ruth Langsford. The newlyweds signed the register to The First time Ever I Saw Your Face, the song Eamon and Ruth chose at their wedding in 2010. “It brought back memories of our day,” says Sky News host Eamonn. l had a tear in my eye,” adds Ruth “Amanda and Sean look so in love”

“I’d given up modelling and was going to start training to be a teacher. Then I got the call to go in for the screen test, so who knows what I’d be doing if l hadn’t got that.”

They were destined to meet, thinks Sean, 36. “1 was offered the series initially, but I had to turn it down as I had other work, then luckily they called me back.”
Marriage felt like an important step in their relationship. “Having a child suddenly made me quite old fashioned,” says Amanda. “I wanted her to have parents who are married.

“Even though we’ve both been married before, it was very important for us to get married in a church,” she adds. “And Babington lets you do that. For me, it wouldn’t have felt special enough if I’d just married in a room or registry office.

“I’d always said, ‘I’m not going to get married again and I won’t be changing my name’ — and now I’ve done both,” adds Amanda, though she will still use the surname Lamb professionally.

“I’ve certainly learnt some really valuable lessons in the past, continues the 39-year-old. “I know that you can’t take a relationship for granted and you’ve got to work through the bad times.

“I think relationships are like plants. “You can’t just put a plant in a room in the dark and hope it’s going to live. You have to feed it, nurture and spend time with it. Here endeth the lesson,” she jokes.

Amanda says she feels “one hundred per cent different” now she and Sean are married. “It’s a really lovely feeling, more solid, I guess.”
Sean agrees. “The funny thing is — and I don’t know how long this will last — she’s letting me take charge quite a lot,” he laughs. “She’s letting me play the husband card. It has changed the dynamics.”

Daughter Willow appreciates the difference, too. “She keeps saying ‘our wedding’ and thinks we all got married,” says Amanda, who admits that they’d “bribed” her to sit still during the ceremony by offering her a big present. 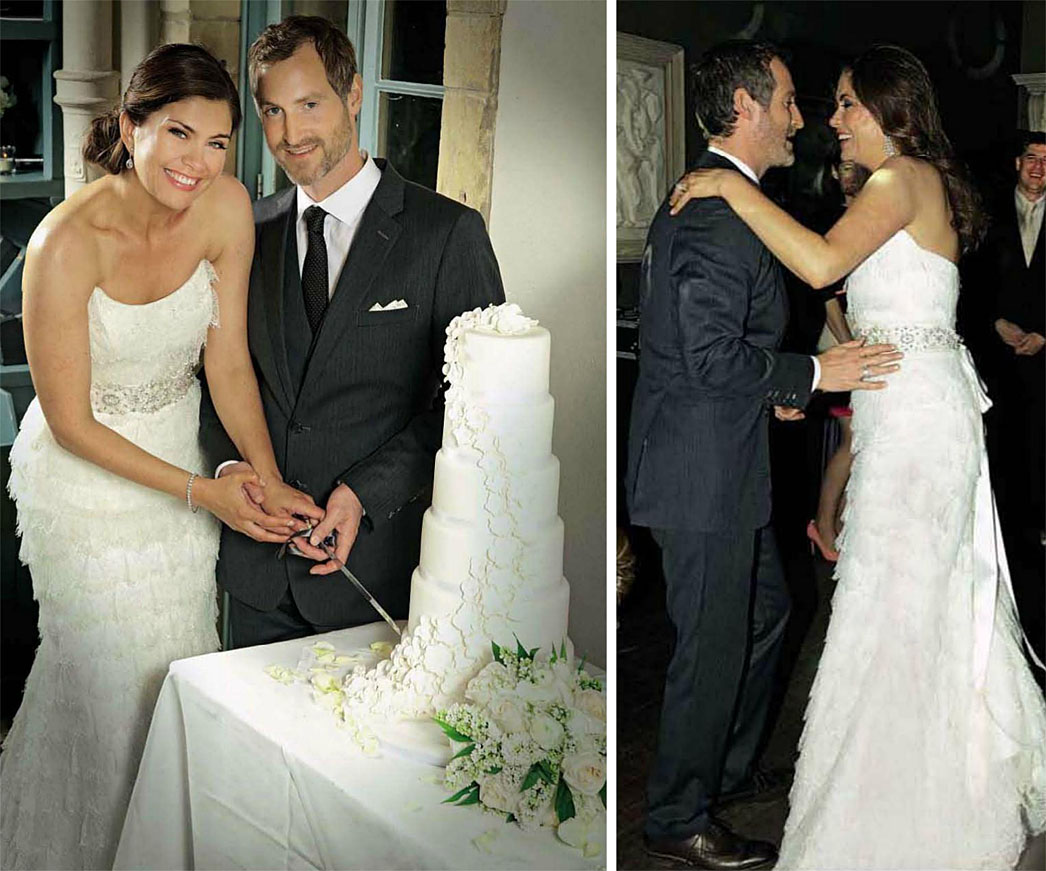 The newlyweds grab the spotlight, to cut their GC Couture cake and take their first dance as a married couple

Their first dance as a married couple was to Take That’s Rule the World and Amanda thinks the track sums up their relationship. “It’s a song that I can’t listen to without crying. It includes the line ‘You saved my soul’ and you did,” she says, looking at Sean. “I was in a pretty dark place until you came along.” The dance floor was soon packed with other guests. “Everyone was up, from Deborah Meaden to Eamonn,” says Amanda. “Ruth told us that Eamonn never dances, but he was up there busting some moves.”

The celebrations continued until around 2am and the couple remained at Babington for a two- day mini-moon. They had a week off before Sean returned to work on a new Sarah Beeny property show and also went to Norway for a travel programme. Amanda has a new Channel 4 property show lined up and they will go on another honeymoon, with Willow, to Greece in June.

Until then, they are still on cloud nine. “I remember looking around at the reception and thinking that here was every single person that I loved dearly. Being with them and seeing them all laughing and joking and having fun are memories that will last forever,” says Amanda.

“I‘ve got an amazing husband, the most beautiful little girl, a great life and I just keep pinching myself. I’m incredibly grateful and thankful.” 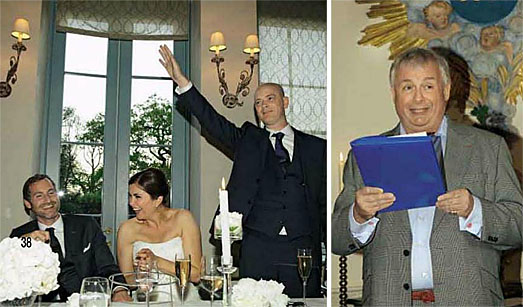