A regular face and one of the leading celebrities to attend the National Television Awards, Holly Willoughby always dazzles the media wearing elegant designer dresses that show off her stunning curvaceous figure. 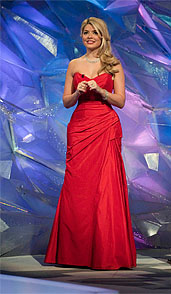 Suzanne’s dresses on many high profile events. Holly Willoughby is a naturally beautiful celebrity and when she wearing a Suzanne Neville dress amplifies just how beautiful she really is. Holly is a big fan of Suzanne’s dresses and often complements this UK designer on her blog and tweets.

A leading role model for pregnant women, Holly Willoughby doesn’t shy away from showing off her pregnant curves and reassures us that this is a time to be proud of such blooming beauty. Holly Willoughby visibly demonstrates that pregnancy is not does not hinder her performance as a national television host and promotes a positive perception of pregnancy for women within the work place.

Holly Willoughby has worn a range of designer dresses to the National Television Awards over the years and the question everyone is asking is, who’s designer dress will she be wearing this year?